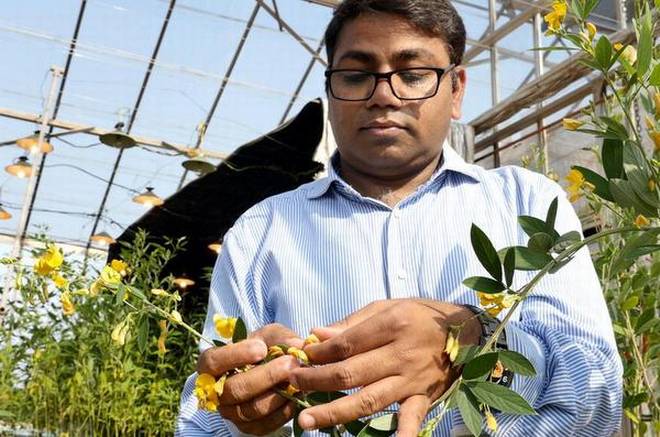 Developing high nutritional varieties of chickpea and pigeonpea just got easier. With new technology, genomic processes that could have taken years were completed in a few months.

This has been possible with the work of scientists from the International Crops Research Institute for the Semi-Arid Tropics (ICRISAT) in collaboration with NRGene, Israel, which helped create multiple assembly lines of pigeonpea and chickpea genomes. This means scientists can not only better understand crop traits, they can also significantly speed up work on improved varieties.

With this technology from NRGene, ICRISAT has chickpea and pigeonpea genomes to a reference level quality that researchers can use. This would help maximize favourable nutritional properties of these high-protein legumes.

“The developing world has long faced the pressures of food security with limited farmland,” says Rajeev K. Varshney, research program director of Genetic Gains and director of Center of Excellence in Genomics and Systems Biology, ICRISAT. “For effective use of genomics-assisted breeding, we need reference genomes of several varieties of a given crop. Therefore, new assemblies of chickpea and pigeonpea lines by NRGene and ICRISAT will allow our scientists and partners to better understand plant traits to breed more nutritional varieties,” he adds.

ICRISAT, in partnership with other institutions, has already decoded and documented genomes of pigeonpea and chickpea (Nature Biotechnology 2013, Nature Biotechnology 2012). Traditional methods would have required years to complete each individual assembly. NRGene’s DeNovoMAGICTM 3.0 delivered multiple assemblies in a matter of months.

“While DeNovoMAGIC has been successfully deployed by the world’s leading seed companies and academic institutions, implementing this for organisations like ICRISAT enhances our mission of making an impact on the world food supply,” says Gil Ronen, CEO of NRGene, adding, “Chickpea, pigeonpea, and other protein-rich legumes will be even more critical crops in the years to come and we are glad that our technology can be used to improve the nutrition status of the world.”

First from China to pursue course at College of Defence Management

He is among the 154 select officers in the rank of Colonel and their equivalent in the Navy, Air Force and Paramilitary Forces, including 10 officers from friendly foreign countries including Bhutan, Bangladesh, Mozambique, Nigeria, Philippines, Papua New Guinea, Uganda and Vietnam.

Lt. General Cherish Mathson, Army Commander, South Western Command, delivered the inaugural address and discussed the importance that the course has in empowering every future leader. The international and tri-service flavour of the course allows varied and unique learning experience for the participating officers.

The course curriculum covers various management subjects related to Behavioural Sciences, Decision Sciences, Resource Management and Research Methodology. The course is pitched at the directional and conceptual level with focus on application of management tools and techniques in operational management. It also includes visit to the field formations in Forward Area, a ‘management education tour’ of private and public sector establishments and an international strategic management tour to understand nuances of geopolitics.

Participants also need to carry out ‘project studies’ to find solutions to challenges faced by the Armed Forces. They are awarded degree of Master of Management Studies (MMS) by Osmania University and a Certificate of Advance Course in Management by All India Management Association (AIMA) on completion of the course.

Madala Ranga Rao, considered the original revolutionary hero of Tollywood with path-breaking films in the 80s, promoting the Leftist ideology, passed away on Sunday morning at a private hospital in the city.

Nicknamed Red Star by the industry and film-lovers, Ranga Rao was 71 and he had been suffering from heart-related ailment for some time. He was operated upon last year for heart ailment and was recovering. He had been associated with the CPI’s cultural wing for a long time before he ventured into films, promoting the same ideology.

Though he started his career with Chairman Chalamayya, a political satire, he shot into fame with ‘Youvatharam Kadilindi’ in 1980 and bagged the Golden Nandi award. He didn’t look back for nearly a decade with super-hits, including Erra Mallelu, Mahaprasthanam, Viplava Shankham, Praja Shakti, Erra Suryudu and Swarajyam Maro Kurukshetram. Some of these were golden jubilees, a rare achievement in the era of big heroes. There was a huge fan following for him, among the youngsters particularly. 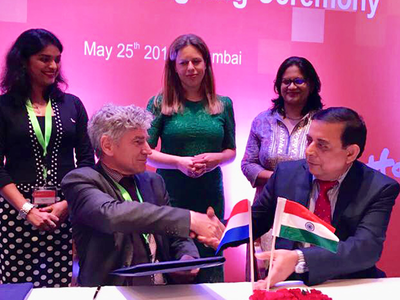 A global partnership on technologies has been signed between ICRISAT, Hyderabad and KeyGene, a Netherlands-based agricultural biotech company which will potentially benefit millions of smallholder farmers across Asia and Africa.

The partnership was entered into on May 25, 2018 in Mumbai by KeyGene and the not–for-profit scientific research organization, the International Crops Research Institute for Semi-Arid Tropics (ICRISAT) with the signing of a Letter of Intent (LoI), for research and co-development on legumes and cereals. The two institutions will work together using novel crop innovation solutions based on KeyGene’s proprietary technologies and know-how.

The signing took place at a high profile trade mission hosted by the High Commission of The Netherlands, in presence of the Dutch Deputy Prime Minister and Minister of Agriculture, Nature and Food Quality (The Netherlands) Ms Carola Schouten, in Mumbai. The LoI was signed by Dr. Kiran K Sharma, Deputy Director General Research (Acting), ICRISAT and Dr. Arjen van Tunen, CEO, KeyGene.

KeyGene and ICRISAT will work together on innovative approaches for trait development and gene discovery. KeyGene will share its knowledge and expertise on crops and the use of KeyGene’s crop innovation platforms. This includes KeyGene’s Sequence Based Genotyping (SBG) and mutation breeding technologies. The genetically diverse grain legume resources of ICRISAT will serve as a reservoir for the identification and exploitation of useful traits. These will be used as a starting point for crop breeding and mutagenesis programs. Capacity building and skill development of start-up entrepreneurs is also envisaged in this collaboration through ICRISAT’s BioNEST-Bioincubator “BioNCube”.

“We look forward to this collaboration with ICRISAT to combine scientific expertise from both organizations. The applications of KeyGene technology in the germplasm of ICRISAT’s mandate crops can help develop highly productive and resilient crops for food and nutrition security of the poorest populations in India and Africa,” said Arjen van Tunen, CEO KeyGene.

“As part of this partnership, we are hopeful to see rapid improvements in the applications of technology and its translation into next-generation agricultural products to benefit smallholder farmers in the drylands. We also believe that the combined knowledge will enable building capacity to foster innovation in agriculture,” said Peter Carberry, Director General (Acting), ICRISAT.

The collaborative efforts are aimed at improvement of the crops such as chickpea, pigeonpea, and groundnut. It reflects the mission of both institutions – where KeyGene has been supporting organizations for R&D challenges in agriculture and ICRISAT has been partnering private sector capabilities for public good.

Shaji N.M., a farmer who was conferred the Biodiversity Award under special mention category by the National Biodiversity Authority, attracted many eyeballs during the award ceremony on Tuesday.

After receiving the award, he presented seed pens as return gift to the dignitaries, including Governor E.S.L. Narasimhan from whom he received the prize. “It is made of paper. You can use it as a normal disposable pen, and when the ink is exhausted, you can just throw it away. It contains a seed, which will give birth to a tree in future,” he explained.

Making seed pens is more like a hobby for Mr. Shaji, whose major occupation is conserving tuber species.

Started 20 years ago as a response to the drought conditions in Wayanad district where he lives, his passion has taken him places across the country, in search of newer tuber species. “I have a collection of 200 edible tuber species, including the rarest ones, besides herbs and medicinal plants on my four-acre land,” he says proudly.

He has shared the germplasm of the tubers with institutions such as Central Tuber Crop Research Institute and Kerala University.

Recipient of many awards, including National Plant Genome Saviour Award, Mr. Shaji’s conservation efforts are not limited to tubers; they extend to rice. He grows 17 traditional varieties of rice on the meagre plot, besides dabbling in fish farming, bee keeping and horticulture.

There were nine winners and 13 special mentions in total at the biodiversity award ceremony, among whom two were from Telangana.

Sangham Women Farmers Group from Medak won the award for ‘Sustainable use of Biological Resources’ for its efforts in traditional and organic methods of seed processing.

The Biodiversity Management Committee of Modi (Jheri) village of Kerameri mandal in Asifabad district won under special mention category, for conserving 26 native varieties of pulses and cereals. Among them, two varieties ‘Erra Machala Kandulu’ (a variety of pigeon pea) and ‘Vayunowka Jonna’ (a variety of sorghum) have been registered with the Plant Varieties and Farmer’s Rights Authority of India, while the recognition of another variety, ‘Balintha Pesalu’, is under way.

Awards were also given under Special Mention category to corporates such as Godrej & Boyce, Mumbai, and Coromandel International, Kakinada. Coringa BMC of East Godavari too won under this category.

There were five categories of awards — conservation of wild species, conservation of domesticated species, sustainable use of biological resources, replicable mechanisms for access and benefit sharing, and best biodiversity management committees. 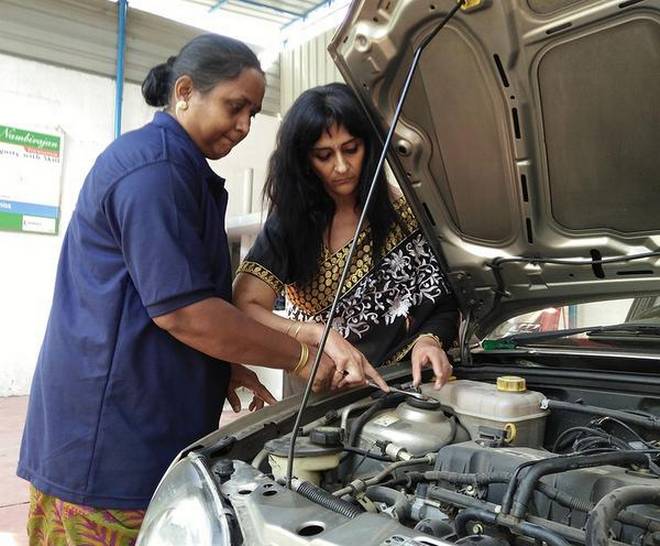 Paramount Auto Bay Services in Secunderabad, Telengana looks like any other four-wheeler auto service outlet, but for the fact that it is owned and managed by its CEO Vidya Nambirajan. A 30-year-old business that was handed down to her from her father turned into her passion when she took over it in 2001, and became the first woman in the city to own an automobile service outlet.

As someone who was initiated into the business with no knowledge of auto parts servicing (she worked in marketing before), what kept her going? When she had to manage the garage due to her father’s illness, surprisingly, the same friendly staff who worked with her dad didn’t respond well to her because they didn’t want to report to a woman in a male-driven set-up. That was when her resolve to learn the job strengthened. “I wanted to prove that I could do it much better, and that drove me,” says Vidya.

As for the customers, “I found that if my mechanic, a male colleague, said some part needed replacement, the customer would readily agree without a question. But a series of whys and hows would be shot at me if I had to deal with the same customer,” she says, of the earlier years. Even today, almost 18 years later, it’s not always business as usual: “People look at me with either apprehension or in awe,” she says.

Over the years, she has hired both men and women, and finds that the difference is that women are more process-oriented and committed, because they don’t take the job for granted. “It’s easier to train women, but more difficult to retain them, as they lack family support,” she says. She herself is process-oriented, and has ensured that her garage is ISO-certified.

She has also set up a Skill Development and Placement Centre, a service that she extends free of cost to women. Her students are placed in India and abroad as automotive service technicians. In a first, she has tied up with DUALpro, Germany, in conjunction with the Indo-German Chamber of Commerce (IGCC). A three-month on-the-job German Certification Course equips technicians to work anywhere in the world. She has also ensured the institute is DAkkS-certified, a German certification for quality management.

Affiliation to the Automotive Skills Development Council, another first in Telangana, qualifies her trainees as Automotive Service Technicians, assisting them to advance in their career. Vidya has also tied up with major on-road assistance services like MyTVS, India Assistance, and Allianz. She has plans to expand her business all over South India.